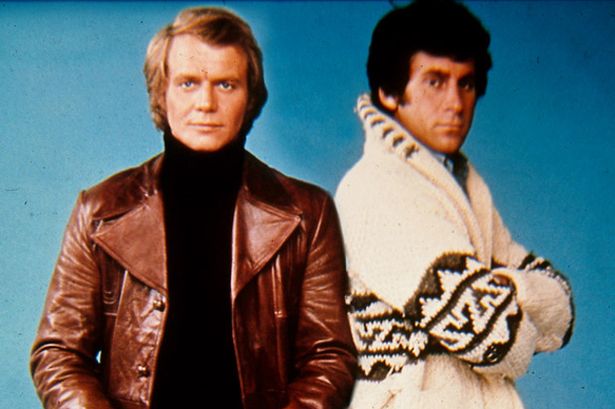 Americans may have challenges with the cops, but boy, oh boy, do they watch cop shows. It’s kind of a central theme of American life.

This has been true in every generation - I personally grew up watching Starsky & Hutch, Baretta, Kojak, Hill Street Blues, NYPD Blue, re-runs of Adam-12 and Dragnet from the 1960s, and a host of other shows about the fuzz. And let’s not leave out Cop Rock - a (I am not kidding) musical police procedural drama. Really, click it. TV Guide called it, “the single most bizarre TV musical ever made.”

It’s not just television: in ten of the last 15 years, there have been Top 20 grossing films with the central theme of law enforcement - either focused on those in it or avoiding it. This leaves out action films with a vaguely “law and order” theme, like the James Bond movies, or other super-hero moves, but does include comedies. In 2013, for example, we had The Heat, We’re The Millers, American Hustle and Identity Thief, all with strong themes of law enforcement or breaking the law and contending with the cops.

The reason I went on ad-nauseam is to drill home the central point that, while Americans believe that they understand, deep down, how police work is done, I put it to you that what they really understand is how police work is done on police television shows and in police movies. Americans absorb TV in alarming quantities, and this starts young: even in this new media world, television viewing dominates media consumption. The average 8 to 18 year old consumes 4:30 hours of television a day, up from 3:51 in 2004Rideout, Victoria J., Ulla G. Foehr, and Donald F. Roberts. “Generation M: Media in the Lives of 8-to 18-Year-Olds.” Henry J. Kaiser Family Foundation (2010).. This is despite technological advances like smart phones, phablets and tablets - as it turns out, the kids are using those devices to watch more television.

Children watch TV years before they can speakKoski, Melissa. “The Representations of Race and Ethnicity on NYPD Blue and Law & Order: An Analysis of the Portrayal of New York City on Crime and Police Drama.” (2007). and television, “carries important messages that can influence attitudes, actions, and the values of its viewers. Television is undoubtedly one of the most influential sources of information in our country.”[Ibid.]

The problem is that it’s not true. It’s drama. It’s make-believe.

It's always been like this. In 1954, Time Magazine reckoned that, “More people are killed each year on TV’s crime shows than die annually in the six largest cities of the U.S.”Stark (1997, p. 35), quoted in Rogers, Margaret. "Arresting Drama: The Television Police Genre." Studies in Learning, Evaluation, Innovation and Development 5.2 (2008): 78-84. Television cop show characters, so that everyone can keep the players straight, are the crudest of stereotypes, whether of iconography like clothes or setting, or behavior, such as violence, disloyalty, cowardice, or irrationalityHurd, G. (1981). The television representation of the police. In T. Bennett (Ed.), Popular television and film: A reader. London: BFI., Ibid..

But despite all that, TV undeniably molds how we think, and we feel personally close to characters. What we see on TV shapes our feelings even about race relations and properties of people we have never met. In the same way, when we see police shows that show a homicide every episode, we believe that crime is more prevalent than it really is. “The social construction of reality theory suggests that because of the vividness and realness of television’s images, programs can often become part of viewers’ sense of reality,” wrote Melissa Koski, whose work highlighted studies of those shows against real-world crime statistics and found them skewed, sometimes dramatically:

“Gerbner (1980) explains that television often portrays crime as a frequent event that may lead viewers to believe crime is more prevalent than statistics actually indicate. He also states that viewers find crime portrayed on television as significantly more violent, random, and dangerous than crime in the “real-world”. This distorted reflection of reality then leads viewers to internalize these images and develop a “mean world view” that is often characterized by mistrust, cynicism, alienation, and fear. Unfortunately this world view is often transferred toward law enforcement figures, who are often the most public representatives of the Criminal Justice System.”Gerbner, G., et al, quoted in Ford, I. V., and T. George. “Media Influences and Student Attitudes Toward Law Enforcement Figures Within Northeast Tennessee.” (2013).

Studies have also shown that while TV violence was directly related to fear of crime, there was no significant correlation of TV crime to actual crimeJamieson, Patrick E., and Daniel Romer. “Violence in popular US prime time TV dramas and the cultivation of fear: A time series analysis.” Media and Communication 2.2 (2014): 31..

So since we know how most people can recall completely useless information that has nothing to do with policing, let me ask you, genuinely, no tricks: do you know the answers to these 10 very basic questions about police use of deadly force?

Have you ever seen, personally, a cop stand up for another cop who broke the law? Think to the last time you heard of this - cops illegally standing up for another cop. Was it on the news? Or was it on a television show? Both happen, don't get me wrong, but it happens much more often on TV than in real life.

So after all that, I cannot answer this next question - only you can: Do you really understand these issues of use of force, use of deadly force? Or did you just feel as if you had a handle on it, because, perhaps, of the thousands of hours of television police programs you’ve watched?

Next time you have an immediate reaction to something about the cops you see on TV, I can only ask you to stop, and ask yourself whether you feel you personally understand the laws, tactics, techniques and procedures used by the police, and the issues at stake, enough to have an opinion. And if not, ask someone. Ask a cop, ask a lawyer, ask a prosecutor or public defender; ask a judge. Ask a criminal justice student or law student. Find out enough to take the fight to the cops when they abuse their authority.

Argue from a standpoint of substance, not Starsky & Hutch.