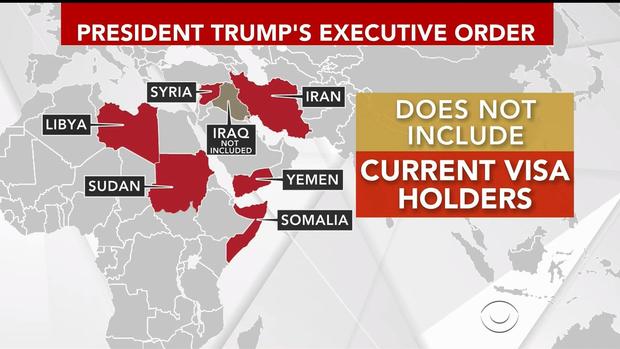 It’s been really difficult to wade into the discussion of the proposed travel ban, because tempers are hot and both sides of the debate - pro and con - are so angry that they are loaded for bear.

I won’t opine on the proposed ban.

I want to point out, though, that the phrase, “Muslim majority countries,” the euphemism adopted universally by the media to describe the countries that are the targets of this ban, is really bad. It’s bad because it is both non-descriptive of the targets, and politically loaded.

First, the targets are Iran, Yemen, Somalia, Syria, Libya, and Sudan. While it is true that the populations of those countries are mainly Muslims, to describe these countries as “Muslim majority” in no way indicates why the other 44 countries in the world whose populations are also majority Muslim are not included in the ban. For example, if this were a ban on travel by people from Muslim majority countries, one would be surprised that the ban doesn’t cover Bangladesh (90% Muslim); Malaysia (61% Muslim); Pakistan (98% Muslim); Algeria (98% Muslim); Morocco (99% Muslim); or several other countries.

The appellation is really sloppy: Christians or Muslims make up the largest religious group in nine-in-ten nations around the globe, and Muslims comprise the majority of 50 of the world’s countries, according to the Pew Research Center.

Under the same logic used by the media to describe Iran, Yemen, Somalia, Syria, Libya, and Sudan, I could say that we should refer to these thusly: “California has banned travel paid for by state funds to eight Christian majority US states.”

As we can see, this is not helpful.

While candidate Trump made comments that I consider to have been reprehensible and un-American about “a total and complete shutdown” of the entry of Muslims to the United States,” the travel ban provided different criteria. Regardless of the stupidity of these words and phrases, and regardless of the efficacy of his proposed ban (which is actually something the President has historically enjoyed wide latitude in employing), I am speaking only of the language used by the media in describing this proposal.

The targets, again, are Iran, Yemen, Somalia, Syria, Libya, and Sudan. This begs the question: is there anything else about these countries, anything other than their Muslim majority, that stands out when compared, for example, to Niger, which is 98% Muslim?

As far as President Trump’s references to the standards of vetting extant in these countries, I must say that his concerns are my concerns: it it, simply, factually, not possible to vet (or background-check) individuals in those countries. Their record systems, which were corrupt to begin with, are largely ornamental, and contain information that is literally useless in providing investigators on the US side actionable intelligence about a given person or persons.

To reduce this legitimate concern to one merely of religious preference is cynical at best, and highly misleading at worst. It is, in fact, highly dishonest: if the ban were one on Muslim majority countries, there would be 50, and not eight, on the list.

To use politically-motivated and suggestive euphemism to thwart in the mind of the public in furtherance of a political agenda a proposal that is in fact based on legitimate security concerns, is foolish at best, and dangerous to American lives at worst. It removes the ability to debate intelligently the proposal, and to sufficiently distinguish it from the rhetoric around it so moronically proffered by candidate Trump.

I’m not advocating the travel ban. I don’t know enough about it to opine one way or the other.

But I am advocating honesty and transparency in language and description of the proposed ban in our media.