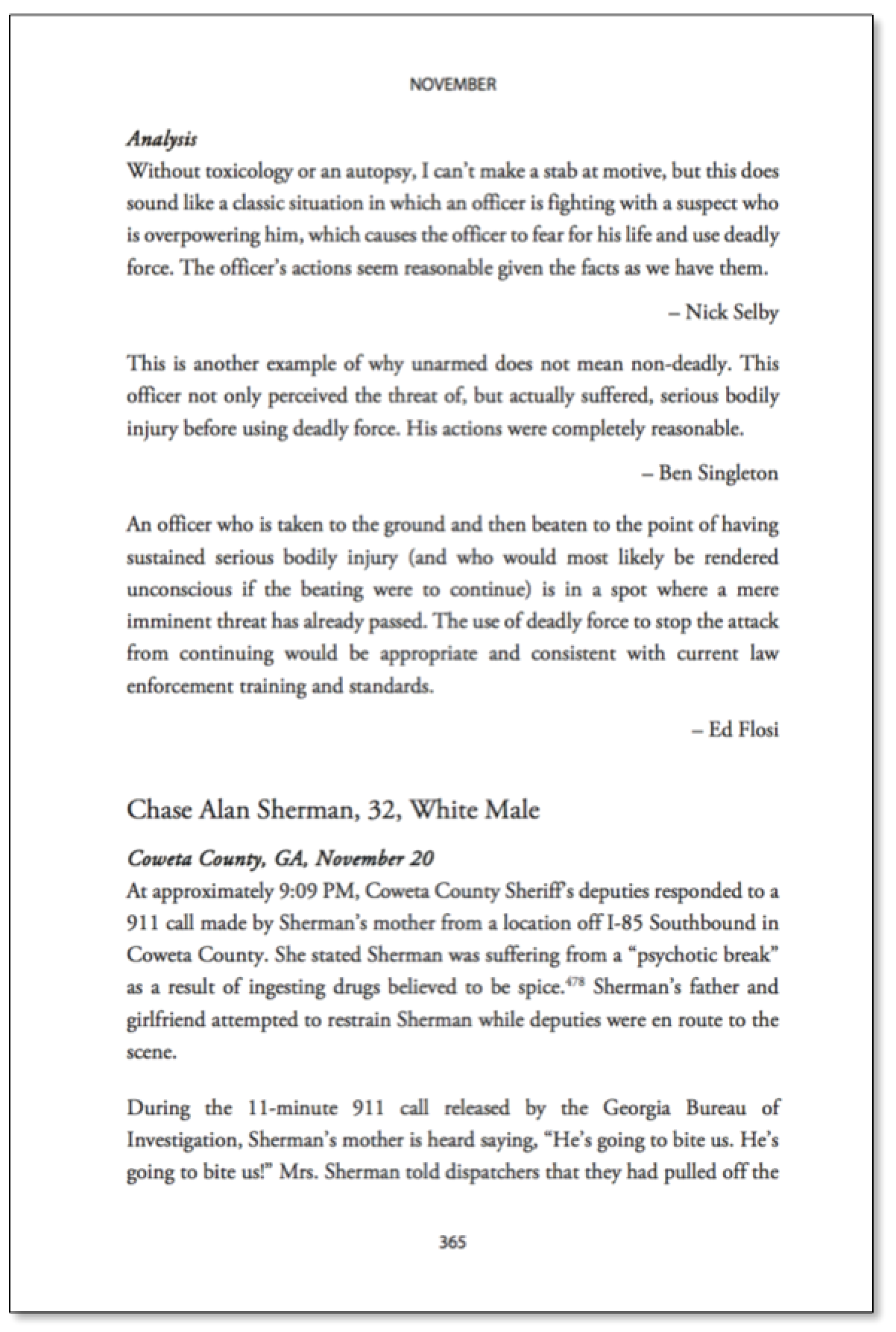 This week, video was released in the case of Chase Alan Sherman, a white male who died after an encounter with deputies in Coweta County, Georgia on November 20, 2015. The incident is covered on pages 365-366 of our book, In Context: Understanding Police Killings of Unarmed Civilians, however at the time of writing, the video was not available to us. Now that we have viewed the video, we have additional commentary.

First, the text as written in the book:

At approximately 9:09 PM, Coweta County Sheriff’s deputies responded to a 911 call made by Sherman’s mother from a location off I-85 Southbound in Coweta County. She stated Sherman was suffering from a “psychotic break” as a result of ingesting drugs believed to be spice.https://gbi.georgia.gov/press-releases/2015-11-23/gbi-investigating-use-force-incident-resulting-death-coweta-county-ga Sherman’s father and girlfriend attempted to restrain Sherman while deputies were en route to the scene.

During the 11-minute 911 call released by the Georgia Bureau of Investigation, Sherman’s mother is heard saying, “He’s going to bite us. He’s going to bite us!” Mrs. Sherman told dispatchers that they had pulled off the interstate with their flashers on, and the dialogue in the car as the family tries to control Sherman is heard, with quotes like, “Hit him in the head! Hit him in the head! Or in the stomach! Hit him in the stomach!”http://bigstory.ap.org/article/c9fbc16c34054e19b1f13a6ffcefb5de/mom- 911-son-trying-bite-people-dies-after-struggl When a dispatcher inquires whether Sherman is in the vehicle, the mother says, “Listen, he did spice and it messed his brain up.”

When the deputies arrived, they attempted to gain control of Sherman. One of the deputies deployed a TASER throughout the struggle in an attempt to control him. Sherman continued resisting the deputies and medical personnel who arrived on the scene. Sherman stopped fighting and went into medical distress, at which point deputies and EMS began performing CPR. Sherman was transported to the hospital where he was pronounced dead.

While I haven’t been able to read the toxicology report (it was not available in March, 2016), it’s pretty clear that this was an acute intoxication of synthetic marijuana, and Sherman’s behavior during the incident is a typical reaction to such an event. It is fairly clear that deputies were attempting to control, not kill, Sherman.

Sherman was intoxicated, to the extent that he attacked his own family before attacking police officers. The officers used the non-deadly tools and techniques available to them in an attempt to gain control of Sherman safely. I believe he died as a result of his recent drug use and physical exertion. 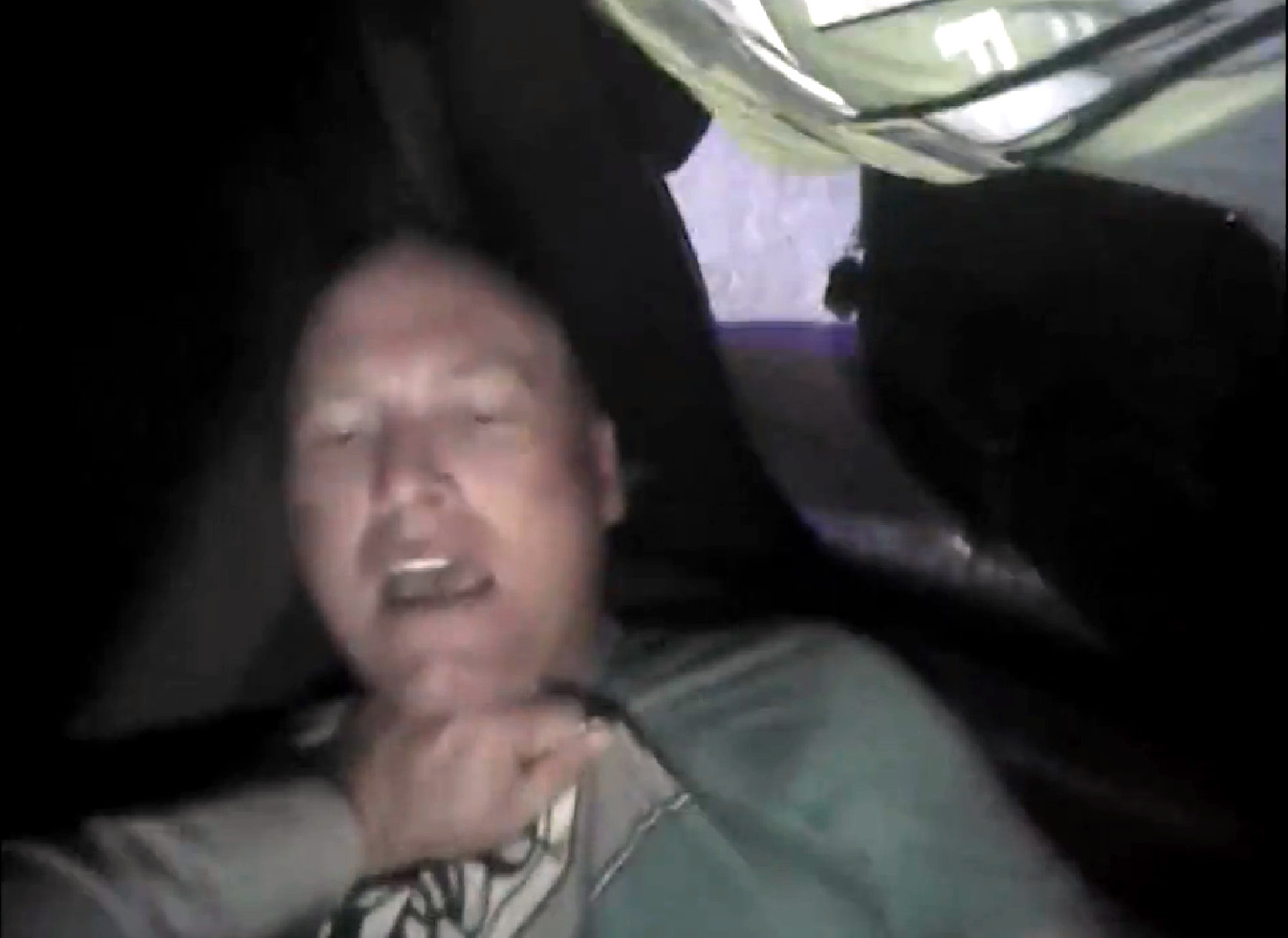 Now that the video is out, we see a lot of the now-standard media coverage: focus on Sherman’s statements of “I quit,” and particular attention to the use of the word “homicide” in the autopsy, and particularly of a “Sheriff’s deputy” saying, “He’s got all the weight in the world on him now,” as if the deputy was saying something evil. In fact, the person placing the weight to immobilize is apparently a medic, and not a deputy (though this is ultimately irrelevant), and he was assisting with a restraint technique that is both approved and is intended to be less painful and more immobilizing than the repeated drive-stuns with the TASER, while the deputies awaited help to transport Sherman to the hospital.

As to the use of “homicide” let me quote from our book on that:

The definition of Homicide is somewhat confusing to those outside the criminal justice system – and we blame television for this. As a medical finding, “homicide” means “death at the hands of another.” The crucial thing to recognize is that, a medical finding of homicide is not a statement of culpability, an indictment for a crime or even, for that matter, a finding that a crime took place - not all homicides are crimes.

Rather than contextualizing the remarks - some of which seem really awful in the light of day - the media has moved to imply that the actions taken by the deputies were unjustified. They were not. To review, I would ask that you please take the 10 minutes to listen to the 911 call. In the 911-call audio, Sherman’s mother states Sherman is, “going crazy, biting people,” that he is “going to cause a wreck,” and that “he is on drugs...hallucinating...he needs to be taken to a hospital.” She continues, “He’s gonna kill us all!", and “He did spice and it messed his brain up.”

Drugs are not a crime that calls for corporal or capital punishment, but the behavior of those on drugs can be (and I submit that in this case they absolutely and objectively are) grounds to detain, restrain and treat the person. It’s a pretty harrowing listen, especially as the somewhat obtuse 911 operator tries to understand what is happening and where people are (this is another, different, problem). The mother yells for her husband to “hit him in the head! Hit him in the stomach!” This shows that even Sherman’s mother advocated restraining Sherman through the use of physical force. You can hear Sherman shouting gibberish in the background. By the time deputies arrived, Sherman had badly bitten his fiance and his father.

The New York Times released an edited video. I am not excusing some of the officers’ comments here, but the edits in the New York Times’ video really make it impossible to see what is happening. Despite this, the New York Times ridiculously states that, other than edits for time, the video is unaltered. For the New York Times to act as if it's nothing that its reporters removed crucial contextual statements and actions by the decedent and the deputies is so blatantly irresponsible that I will chalk it up to error in language. However, watching the full, unedited body camera video, available from the Atlanta Journal-Constitution, as well as a slickly-edited montage by the New York Daily News of both deputies' body cameras, one can see and hear exactly what happened. I maintain that, with the obvious exception of some really moronic comments by officers, everything we do see in this video is consistent with the investigation so far and the information released previously, and, I might add, our narrative and analyses above.

There’s one thing I should mention about the video: in fact the officers seem justified in using non-deadly force to try and get Sherman out of the car while Sherman was fighting, kicking, and grabbing the officer’s TASER. As soon as they realized he wasn’t breathing they started CPR and called for help. But the officers’ comments (“I’m fucked...I’m so fired”) are really stupid.

After watching both the NYT edited version, as well as the unaltered AJC video, I observed a few things. First, I observed three TASER probe-mode deployments, and five TASER drive-stun deployments. There were apparently two other probe-mode deployments prior to the start of the AJC video. Despite being handcuffed in the front with hinge-type handcuffs, Sherman was actively resisting immediately prior to each of these TASER deployments. There were no TASER deployments by the deputies except in order to combat active resistance on the part of Sherman. Because active resistance that could not be controlled by the officers is the key behavior, I believe that each of these TASER deployments was reasonable use of non-deadly force. Additionally, we see in the video two occassions during which Sherman actually gains physical control of a deputy’s TASER. That the officer did not go to deadly force is a testament to good training - since the TASER had already been fired, Sherman could not have incapacitated the officer with a drive-stun, and therefore deadly force was not appropriate.

We do not, once deputies are not actively engaging with restraining Sherman, hear deputies sounding angry or hostile - instead they sound concerned. When the medic first arrives and starts to place weight on Sherman to immobilize him, the same deputy who was fighting with Sherman says to the medic, “Watch your knee, he’s got some TASER probes there in his back.” The medic responds that, “He’s out of his mind on that shit...Spice.”

After Sherman has stopped fighting, the medic asks whether he should turn off the vehicle’s engine, which had been on the whole time, giving an indication of the speed and dynamism of the incident. It is turned off.

As soon as the deputies realize that Sherman isn’t breathing, they pull him out of the car and begin resuscitation. There was no delay.

With the benefit of 20:20 hindsight I would say that the deputies may have considered turning off the car and leaving Sherman inside, and getting the parents out of the car, until backup arrived before engaging. But there was no indication prior to engagement that Sherman would be able to fight off two deputies and fight through multiple TASER deployments.

Finally, I must say that I have not yet seen the entire autopsy or toxicology reports. It is worth noting that Sherman was in full fight mode for more than ten minutes before deputies arrived on scene, and then fought full strength with two deputies for at least seven minutes. The taxation this kind of activity takes, and the collapse afterward, is consistent with other drug-related deaths we have covered in the book. I stand by my original analysis as published in the book.