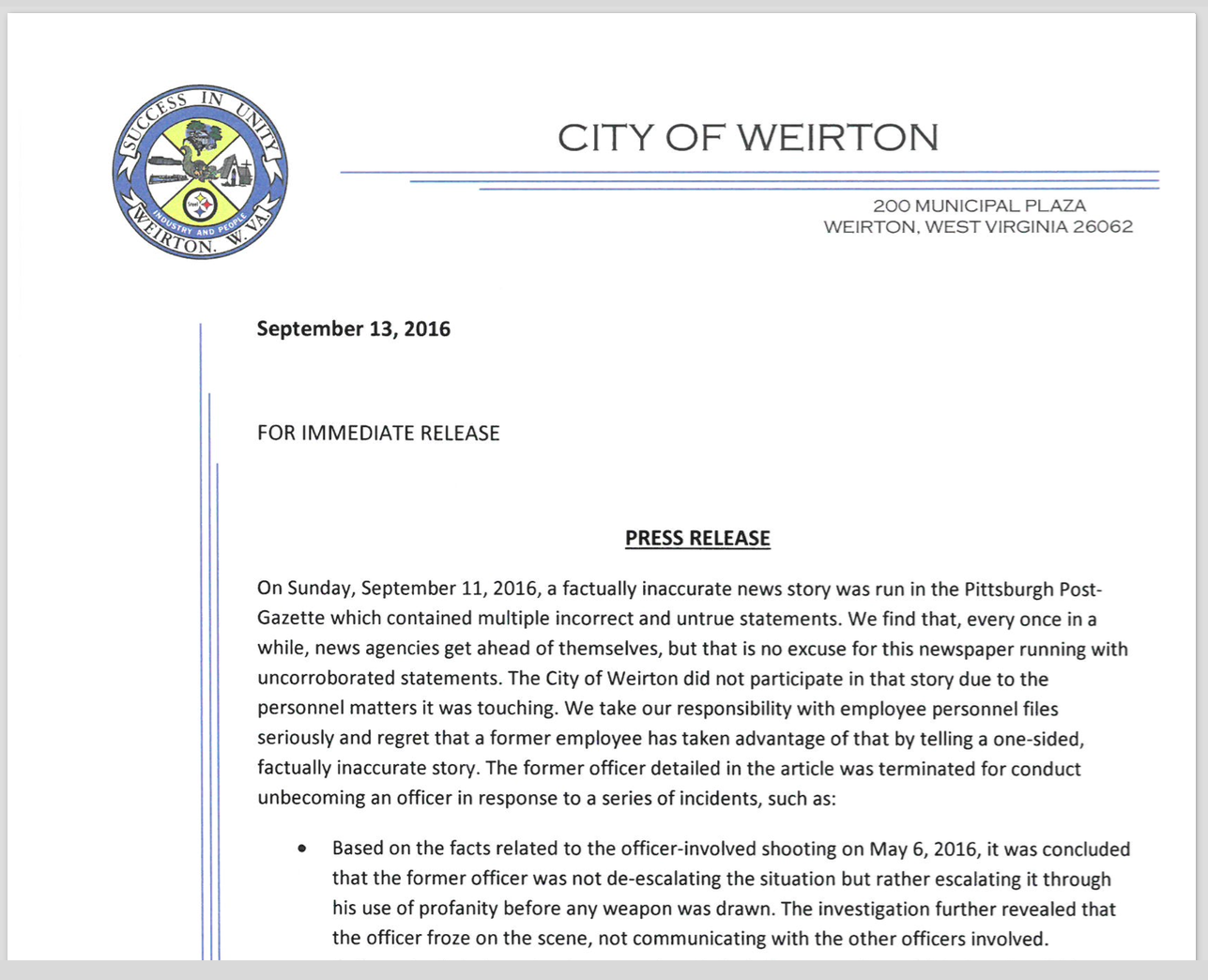 Yesterday I wrote about a case that has raised a fired West Virginia police officer to darling status.

Darling status, that is, in the eyes of usually-anti-police mainstream media - especially including the Washington Post, the New York Daily News, The Young Turks, and other outlets that employ columnists and reporters with literally no training in use of force or law enforcement tactics, techniques and procedures. They ask these stenographers to produce incendiary columns in which they analyze in great detail use of force and law enforcement tactics, techniques and procedures. They do this because these kinds of columns and online-features make lots of money.

To those who don’t want to read the long post, Stephen Mader, a West Virginia cop and former US Marine was responding to a call of a suicidal man with a gun, and the officer tried to talk the man down, rather (according to the media) than shooting. When other officers arrived on the scene, they shot fatally RJ Williams (the allegedly suicidal man), and that after the investigation, Mader was fired.

The media immediately took the position that Mader was a hero of de-escalation and a wonderful police officer (aspiring journalist Shaun King called Mader a “Gem”; and video blogger Cenk Uygar called Mader “A good cop fired for doing the right thing.”).

Note that I don’t have any idea whether Mader (who sounds, truly, like a wonderful guy; the kind of guy I would love to have as a friend: Marine, officer, father, husband…) was right or wrong. I don’t know whether he should or should not have done what he did. I don’t know whether his actions were heroic, cowardly, or even run-of-the-mill. I am saying, clearly, that neither I, nor you, know.

My point was that, since none of those writers and stenographers knew anything but official statements, and since those were rather light on specifics, neither they nor I (an officer myself, the author of a book on police use of deadly force, and someone who studies this), nor certified use-of-force experts, officers, lawyers, and hell, banana-pickers or plumbers or anyone was in a position to take any position, let alone one in support or condemnation: we just don’t know what happened.

What I left out (because I couldn’t find it until this morning) was the official press release from the city, which addresses specifically some of the things that I said. From the standpoint of the city, the media was wrong about some really obvious key facts of the case – this has been my primary contention since the beginning: we just don’t know. Everyone, it seems, was basing his glowing reports of heroism on the same Post-Gazette article, which entered the anti-police media vortex at the same time, and echoed through the brains of these bloggers.

“On Sunday, September 11, 2016, a factually inaccurate news story was run in the Pittsburgh Post-Gazette which contained multiple incorrect and untrue statements…”

What’s that, you say? Multiple incorrect and untrue statements? Do tell!

“We find that, every once in a while, news agencies get ahead of themselves, but that is no excuse for this newspaper running with uncorroborated statements…”

How true that is. Shame on all of you stenographers, who simply copied, cribbed and then pronounced to the world your verdict. Except…What exactly did they get wrong?

The statement specifically refers to escalation – not the de-escalation parroted by King and Uygur – by Officer Mader in the Williams case. The city claims that Mader froze and was uncommunicative when the other officers approached (the possibility of this was blazingly obvious to anyone in law enforcement given the pacing and dynamics of the event, but again, we don’t know, so we didn’t comment).

The city states that the Post-Gazette, and all those who cut-and-pasted from that article, stated that the officers shot Mr. Williams in the back of the head just behind his right ear. 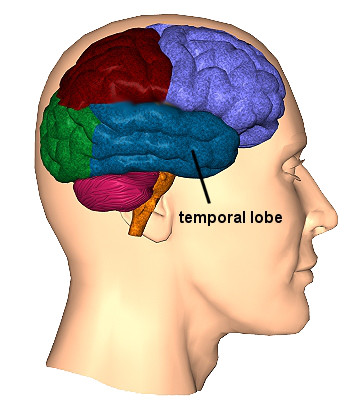 This, the city states emphatically, is specifically incorrect: the Medical Examiner’s report and the details from a press conference about the ME’s report showed the bullet entered through the right temporal lobe. OK, so that is really wishy-washy on the part of the city: the right temporal lobe can be the same as getting shot “behind the right ear.” I’m gonna go ahead and call bullshit right here.

The detail is not that important, except it’s the city playing with words to combat some subtle editorializing on the part of the stenographers, who implied through this that, as good as Mader was, the other guys were cowardly doodyheads who shot a man from behind. Not only am I not a doctor, neither was the person who wrote this press release. I’m not saying, I’m just saying.

The Post-Gazette, and others, stated that the chief told the family in a private meeting that Mader and the other two officers had been returned to duty; why, shouted the transcription-artists, was the family told this when Mader was then fired?

Because they weren’t: the city states that no private meeting took place between the chief and the family, “…as the investigation is being handled by an outside agency.”

The Weirton Daily Times ran a story of an interview with City Manager Travis Blosser, Police Chief Rob Alexander, Detective Gerard Spencer, Sgt. Brian Beatty, Officer Stevie Jo Banannio, and Detective Jason Turner. In it, the Times quotes Chief Alexander saying of Mader that “He raised his voice and used profanities toward Mr. Williams … His own statements contradict his story.”

“City officials also report Mader’s actions during another incident led to the contamination of a potential crime scene, when, they say, Mader ruled a death incident to be from natural causes when evidence at the scene showed it to be a homicide investigation. The medical examiner’s office, city officials said, later ruled the cause of death to be blunt force trauma to the head, neck and torso region.”

“This officer was afforded every opportunity,” Alexander said.

Is the city lying? Is everyone in a room full of cops and city officials including the city manager making this up?

Maybe. I don’t know. Neither do you.

Shaun King, who has never to my knowledge left his DeKalb Avenue condo, claims Mader is a Gem; Chief Alexander and a room full of cops who worked with him, say he was sloppy, that he escalated several incidents, got things wrong, and froze, endangering other officers.

I don’t know. You don’t either.

I don’t necessarily believe one side over the other. And, too, I’ve said many times that cops are like eighth-graders, and five of them getting together to tell a bad story about a sixth? Not unheard of.

To people who actually work in law enforcement - to those who must show up and handle it - suicide calls are highly dangerous. The are also unpredictable, because they inherently involve someone unstable enough to wish they were dead, and often they look at the police as a force to abet or assist them.

On the day my first article ran, two Fort Worth officers were shot and badly injured responding to a call that sounds exactly like that to which Mader responded: a suicidal man with a gun.

According to NBC DFW:

Officers Xavier Serrano and Ray Azucena, found a person in a back bedroom unresponsive from a gunshot wound. They were informed that a witness to the shooting was located in a shed in the backyard, so they went to make contact with that person. When they reached the shed, someone began shooting at the officers from inside the shed.

Azucena had graduated from the police academy in July - a buck rookie, shot with his training officer.

So as you make pronouncements about officer behavior, ask yourself: do you know what dangers they face? Do you understand the dynamics of such cases? Do you know how officers seek to address suicidal people with weapons? If the answer is no, then your positive response to Mader just might be you judging that the ends actually do justify the means - something I’m certain you shout about when the cops do it. I’m not saying you’re hypocritical.

I am saying that you probably know a lot less about policing than you might think.