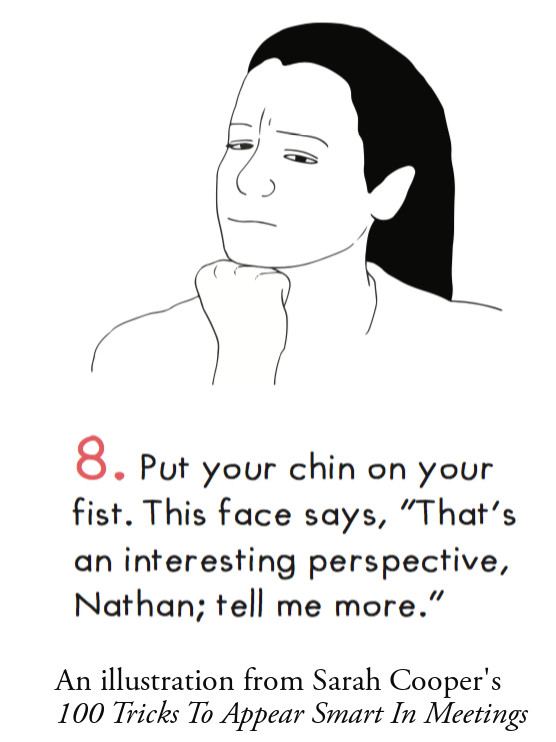 Business communication has always been fascinating to me. People saying things like, "Why don't we make that an action item, to circle-back and sync-up on that offline?" and similarly tortured euphemisms for, "Ask me later" do leave me awe-struck. In her new book, 100 Tricks to Appear Smart in Meetings: How to Get By Without Even Trying, Sarah Cooper brings clarity and insight into the behavior of the world's least attractive people: those who strive to advance themselves in business through calculated meeting tactics.

Cooper's book is an extraordinary accomplishment; it is brilliant in its capture of nuanced douchebaggery that dots the continuum from facial strategies to interruption tactics. 100 Tricks seems to be based on the life and times of every person in a meeting I've ever wanted to punch in the throat.

And Cooper does all this without lapsing into the twee, or ever pushing the joke too far. It's almost an actual How-To guide, to the point that Will, a friend of mine who is very serious, saw one cartoon from the book I'd said that I liked, and he got angry at the suggestion. I had to explain the book's premise to him.

"Oh. I hadn't read the description yet. I was concerned for a moment, because I've seen that guy in a meeting, and I was not amused."

Like Will, I recognize each character Cooper portays. She's had lots of time to observe - Cooper is a veteran of Silicon Valley smarm factories, having spent time at both Yahoo! and Google.

"Start the conversation," she counsels, "with a hard stop." She refers, of course, to the guy who announces at the start of a meeting that he has, "a hard stop at 2 pm."

"This," Cooper says, "will make your co-worker think that every minute of your day is smartly accounted for."

I once knew an IT professional whose job was user technical support at a very large firm. He hated people - truly. I think he may have been genuinely anthropophobicAn extreme, pathological form of shyness and timidity. A specific Japanese cultural form is known as taijin kyofusho. Not to be confused with anthophobia, the fear of flowers. Cooper's Tip #95 is to toast in a foreign language: it will make you seem worldly, like you could really handle those foreign accounts. as well as agoraphobic, because he did everything he could to avoid inter-personal contact and leaving his house. But his job depended on some level of it. I asked him how he did it, and he said, "Well, I've found that if I smoke a large amount of marijuana directly before any meeting, and then babble incomprehensible technical bullshit at anyone who tries to speak with me, they get tired and go away."

Cooper eschews this approach for one that is more subtle, and which she states has the benefit of making you look smarter: beginning a meeting with a shocking fact, such as, 'I never knew my father.'

"This will immediately get everyone's attention for a minute or two," she writes, "and then be stuck in their heads for the rest of the presentation, so they don't listen to anything else you say."

From slowly repeating the smart thing an engineer says (so that when people think back on the meeting, they'll remember you saying it), to asking your colleagues to come up with their own key takeaways, Cooper has every possible dodge, scam or grift used by the kinds of Silicon Valley people who aspire to greatness.

And Cooper, with her simple line-tracing drawings and brilliant but subtle verbal twinkles, eviscerates these beastly techno Yuppies with the zeal of a Samurai standing between his lord's infant son, and an attacking marauder.

100 Tricks to Appear Smart in Meetings: How to Get By Without Even Trying is available on Amazon.com in print and Kindle.