Crime, the Mentally-Ill, and the Non-Obvious

Of the 153 unarmed civilians killed by police in 2015, 29 (or 19%), had apparent mental illness, of which 16 (11% of the total) had a prior diagnosis of a serious mental illnessThis, and the next several statements, from the forthcoming, In Context: Understanding Police Killings of Unarmed Civilians. For many people (including me), this was a real and screaming loud cry to ... do something. After thinking about it for a while, though, and speaking with some folks who spend a lot more time than I do staring at these kinds of statistics, it might well be that the urge to do something might be the wrong one.

“Fifteen deaths?” a friend in government asked. “In the year? OK, have you ever stopped to think that that’s a really good thing?” I looked quizzically at him.

“Cops deal with millions of mentally people each year,” he continued. And that's a compelling point: I've said before that whenever we look at an issue, that issue simply must be judged in the context of how many times it occurred in this, a nation of 320 million people, in which there are some 50 million annual police-citizen interactions, between citizens and one of 800,000 cops serving in 18,000 police agencies. In that context, 15 does sound like a pretty low number. Attributed to the 14th century logician and Franciscan friar William of Ockham, Occam's Razor states that, “Entities should not be multiplied unnecessarily.” The form most people are familiar with, though, is a variation on this: “When you have two competing theories that make exactly the same predictions, the simpler one is the better.” Fascinated? Check out, “What Is Occam's Razor?”, by Sugihara Hiroshi and Phil Gibbs (1996)

Now is when I bring out a phrase I have recently coined, and one which I will use a lot:

Law enforcement is the one place in American society in which Occam's Razor does not hold true.

But what of the claim that 15 isn't that many people, or rather, that 15 people out of millions means law enforcement is doing pretty well? It's complicated. 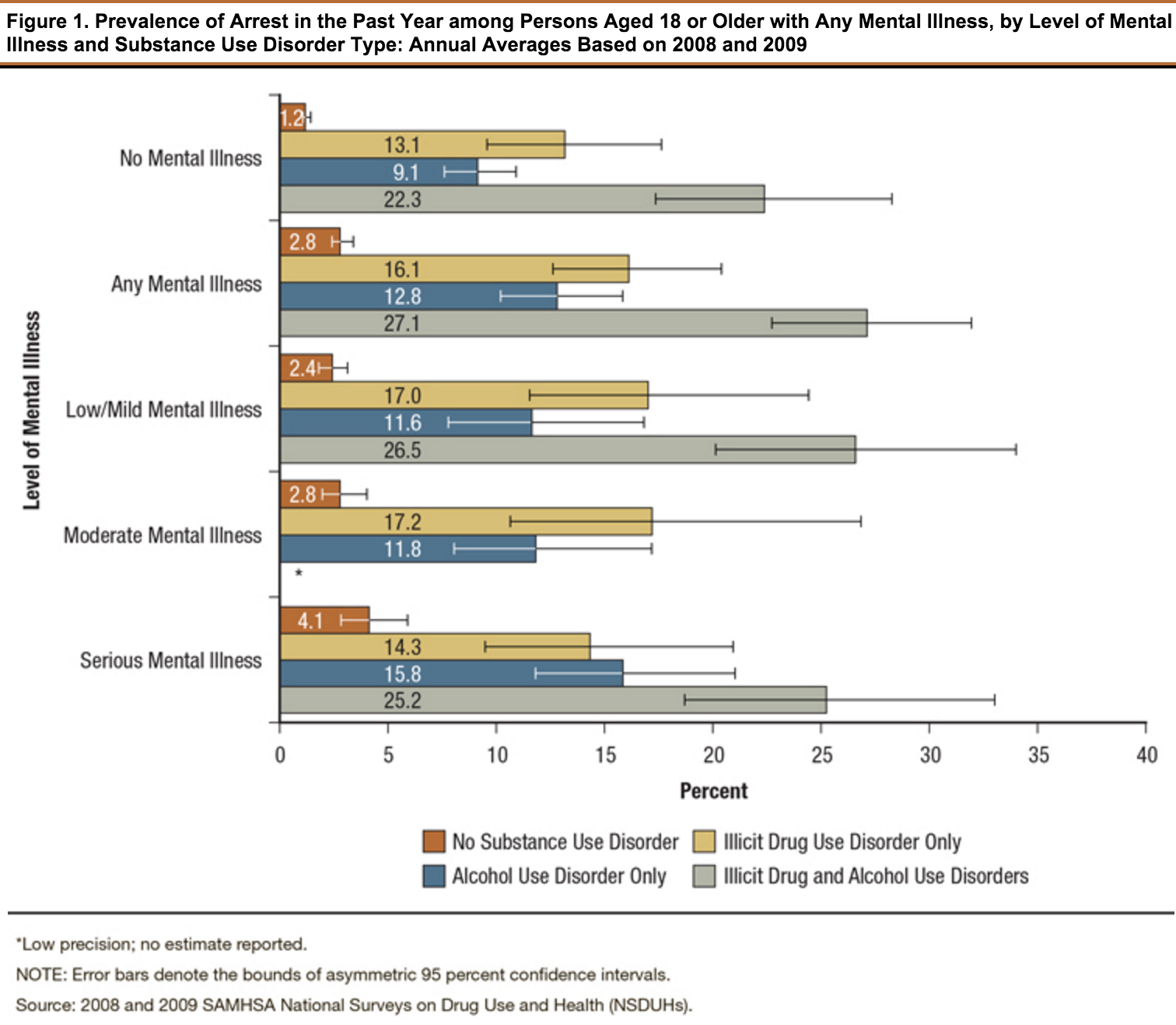 In the last year, about 1.4 million people were arrested who suffer both severe mental illness and illicit drug and alcohol use disorders. That’s about 25% of the 5.7 million people arrestedGlasheen, Hedden, Kroutil, Pemberton & Goldstrom, Past Year Arrest among Adults in the United States: Characteristics of and Association with Mental Illness and Substance Use, Substance Abuse and Mental Health Services Administration, November, 2012. That’s a huge number. Here’s another one: 2 million jail bookings involve a person with mental illness, and approximately 15% of men and 30% of women in local jails have a serious mental illnessSubramanian, Delaney, Roberts, Fishman, & McGarry, “Incarceration’s Front Door: The Misuse of Jails in America” Vera Institute of Justice, 2015..

My friend’s point was, quite simply, and given all standard disclaimers about how every life is precious, if cops are annually handling about 2 million people who are in the throes of a violent mental health crisis and 15 of them die, this might not be the most immediate problem we have in this country. The intersection of law enforcement and the mentally ill is gaining particularly close scrutiny, as well it should. And it is of special concern to me as a police officer and someone who looks at these statistics because mental illness can manifest in so many ways.

We need to move beyond “whether” this is appropriate and get to the real discussion: regardless of the appropriateness by some theoretical standard, the reality is that law enforcement is the first and last option for mental health treatment in this country. Until systemic changes are made to affect that calculus, not training officers to deal better with mental health and addiction-specific behavior is simply negligent. This should not be a surprise (even though it is): the current state of affairs is a result of a series of moves by the United States Congress over the past 50 years.

In 1965, Congress was very specific that its new Medicaid program would not fund state and local psychiatric hospitals. Since the early 1960s, under the Kennedy administration, a re-emphasis to drive mental patients to local and community clinics (and pump them up with Thorazine) had pressed resources. The Carter era saw expansion of community mental health centers' remit to handle substance use disorders, but Reagan-era cutbacks led Congress to cut federal mental health funding significantlyParks, Radke, Haupt “The Vital Role of State Psychiatric Hospitals”, National Association of State Mental Health Program Directors, Medical Directors Council, 2014, Alexandria, VA. The “emptying” of America’s mental health facilities that began in the 1980s has resulted in today’s circumstances.

What we don’t want to do is harm in the name of “doing something”. In the same way that state laws to reduce drunk driving and scofflaws can act as an unintended and regressive tax on the poor while looking to all the world like police picking on blacks and HispanicsSelby, How tracking police data by race can make unfair laws look like the cops’ fault, Washington Post, March 3, 2016, so too are people inaccurately and somewhat unfairly looking at cops as the place to focus when thinking about mental health issues. And when a mentally ill person dies in a struggle with the police, it’s looked upon as a “police issue.” Mental health patients shunted down to the cops for treatment is an awful thing, but if we let the deaths of those in the throes of a mental health episode push us towards knee-jerk solutions, we might miss the larger problem.

The larger problem, of course, is not just mental illness in America in general, but the fact that the mentally ill behave in ways that bring them in more regular contact with the cops. The mentally ill are more likely to be arrested: The prevalence of an arrest in the past year in the 44.5 million adults suffering from any severity of mental illness of any severity was 5.4%; compare this to the 1.8% prevalence of arrest in the past year among those without mental illness. According to The National Alliance on Mental Illness (NAMI): about 10 million adults, or 3.1% of Americans - experience a serious mental illness in a given year that substantially interferes with or limits one or more major life activitiesNational Institute of Mental Health, Any Mental Illness (AMI) Among Adults.

It is also fascinating is to see the failure of our drug and alcohol policies through this prism: The prevalence among those with a substance abuse problem who were arrested last year was 13%, compared to the prevalence of those without a substance abuse problem of 1.5%. Having a substance abuse disorder increased the likelihood of arrest among adults, regardless of the presence or level of mental illness. But it is also interesting to note that 48% of mentally ill inmates are charged with drug-trafficking-related crimesSarteschi, “Mentally Ill Offenders Involved with the U.S. Criminal Justice System” Sage Open, July 2013, 1-11. doi: 10.1177/2158244013497029..

When we mix and match mental illness and drug abuse, we see increasing likelihoods of getting arrested - for example, the prevalence of past year arrest was 2.8% for adults with mental illness but no drug or alcohol problem, but a stunning 16.1% for the mentally ill with an illicit drug use disorder.

That’s why, ultimately, I don’t agree with my friend. To the layman, an acute mental health crisis is indistinguishable from an acute narcotic overdose. The fact that “only” 16 unarmed, severely mentally-ill people died last year at the hands of police is indeed a low number, but it’s not a reason to stop thinking of increasing the things we do that work to keep that number low and try and make it lower.

More clearly: excellent police work and great training has made it so that small numbers of mentally ill people die each year at the hands of the police. Let’s do better: Crisis Intervention Team training has been proved to save lives, save taxpayer dollars and perhaps most important, improve the lives and treatment of the mentally ill. It does this by ensuring better follow up, fewer crisis-admissions and fewer violent confrontations with police.

This is perhaps the most convincing single finding in our Police Killings in ContextStreetCred Police Killings in Context Data is available at https://github.com/StreetCredPKIC research: work to improve the policing of the mentally ill is the lowest-hanging fruit. It must be a top priority. The need for a proactive approach, such as mental health Crisis Intervention Teams and a “Follow-up Based Approach,” is clear and compelling.