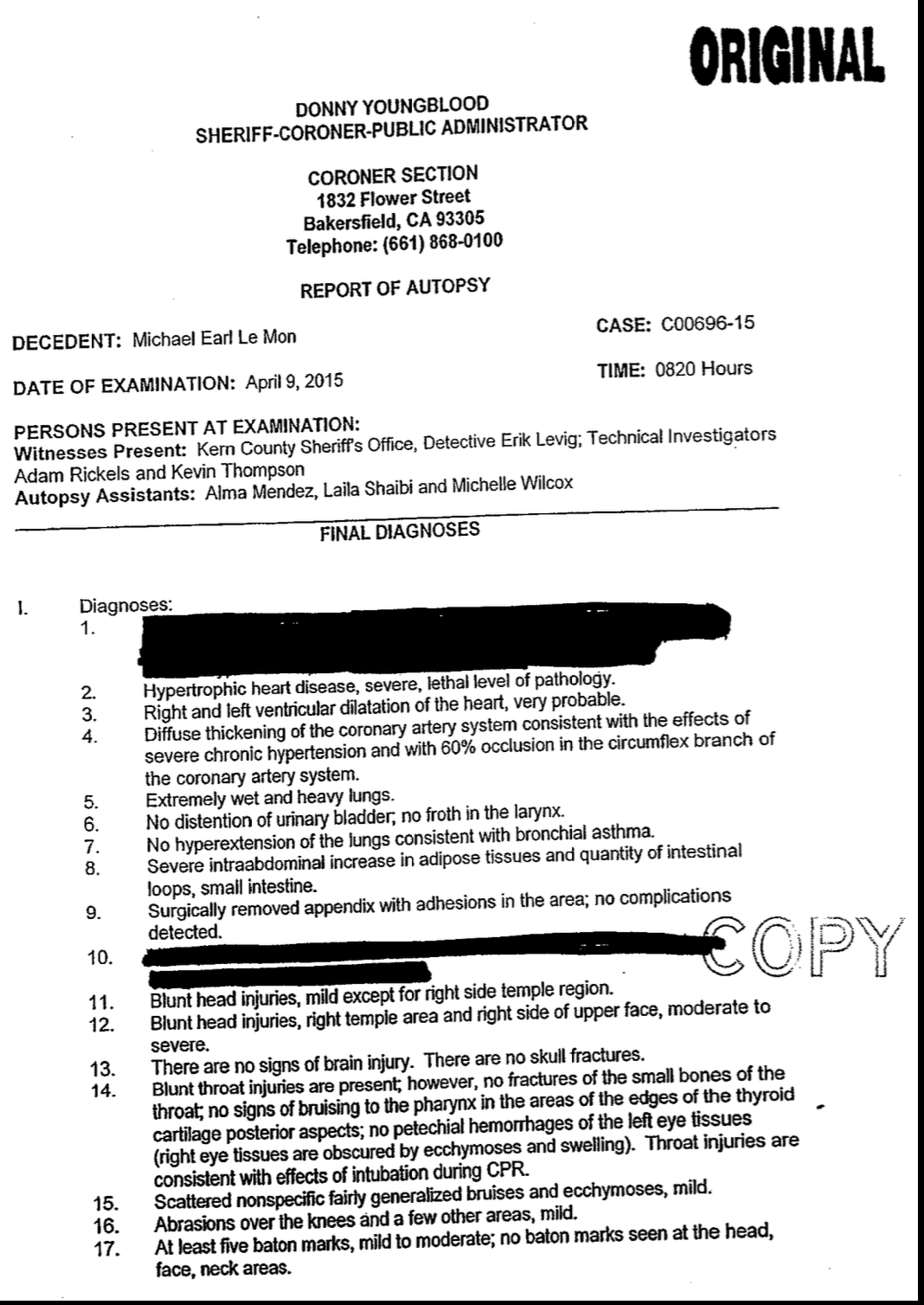 Back in December, 2015, I wrote an answer to the preposterous charge leveled by The Guardian newspaper that, “with little oversight, officers” in Kern County, CA “became the country’s most lethal.”

What The Guardian had done, of course, was take the raw number of people who died after encounters with police, without consideration of why, and add them up. Like school-children with calculators, they decided that 13 was the “worst” number in America.

Hey, don’t get me wrong: 13 is a terrible-sounding number. To bolster its case, The Guardian makes (as it routinely does) a truly beautiful interactive chart showing the 13. In the context of the article, it really appears that these are 13 innocent victims of police murder.

So I wrote an article giving a brief overview of each of the 13 (it turned out that there were really only 12).

Sheriff got a complaint call at 6am that Lemon was disturbing the peace at a trailer park; when deputies arrived 58-year-old Lemon fought them. Deputies used batons, pepper spray and a taser to get Lemon into cuffs. After he was in cuffs he experienced an unspecified medical emergency and died; autopsy results still not publicly available. (NB: This is the only incident I see here that looks suspicious: I hereby offer a standing bet of a six pack of Dr. Pepper to the whole Guardian Counted team that when the autopsy is released it this incident will turn out to be drug toxicity and heart attack.)

Actually, it turns out, the decedent’s name is “Michael Le Mon.”

On 24 November 2016 I sent an email and a check for $15 to the Sheriff’s office for the autopsy and toxicology report in this case. I asked that the records be emailed to me, but was told that they must be mailed.

I have learned that the primary cause of death is Atherosclerotic/Hypertensive Heart Disease, and other significant conditions were Excited Delirium Syndrome and

That’s right: in a public record, the Coroner Report of Autopsy, Final Diagnoses, the primary diagnosis, and the tenth diagnosis are redacted.

Now, first of all, I lost my bet: I said “…this incident will turn out to be drug toxicity and heart attack.” It turned out to be heart attack only.

However, I gotta say, you can put me on the side of the Tin Foil Hat Brigade on this one: this stinks to high Heaven.

What possible legal authority can exist for redaction by the Kern County Coroner of primary diagnosis information (that seems to span more three typed lines) in the case of a man who died of “natural causes” 21 months ago?

What possible legal authority can exist for redaction by the Kern County Coroner of the tenth diagnosis in the case of a man who died of “natural causes” 21 months ago?

It seems that this is another case of a mentally ill and physically disabled man fighting officers.

All that was missing was drugs. Oh, wait.

Toxicology showed that he was on drugs, just not drugs that would have precipitated this: Le Mon tested positive for marijuana (2.9 ng/mL) and caffeine.

As I have written, 52% of people who died in confrontations with police in 2015 fell into the category of being on drugs, or having mental disability or physical disability, or more than one of these.

But marijuana and caffeine has never, in the history of ever, made someone attack anything, except maybe Doritos.

So we got us a mystery. In the Incident Narrative Summary, Deborah C. Mash, Ph.D says,

“The decedant [sic] was known to have a psychiatric disability with a total of 58 calls made to the Kern County Sheriff’s Office in the prior year reporting behavioral disturbances and complaints from neighbors. Mr. Le Mon suffered from Bipolar Disorder or possible schizoaffective disorder as reported by residents at the Lake Isabella RV Resort and Mobile Home Park, where he resided. He exhibited bizarre and paranoid behavior on many occasions in the past, that included verbal outbursts, yelling and screaming, hallucinations and threatening behaviors.

[Download the Toxicology Report, including the Incident Narrative Summary here]

From the narrative, it sounds very much as if the officers had a thrashing, crazed man on their hands, and did everything they could to reasonably stop him: TASER, OC spray, use of several pairs of handcuffs, placing him on his side to avoid positional asphyxiation…

But here’s the thing: with so much redacted from what should and almost always is an entirely open public record, I really just don’t know what to believe here.

I don’t like saying this, but I find myself disbelieving anything I read here until I see the entire, un-redacted report.

I’ve called to the Kern County Coroner’s Office and requested the legal authority under which the redactions were made. Everyone inhale now, Im holding my breath until I get an answer.

Meanwhile, I’ll be happy to give the folks at the Guardian a six-pack of Dr. Pepper. All they have to do is claim it.