The Indelible Narrative Of Hate 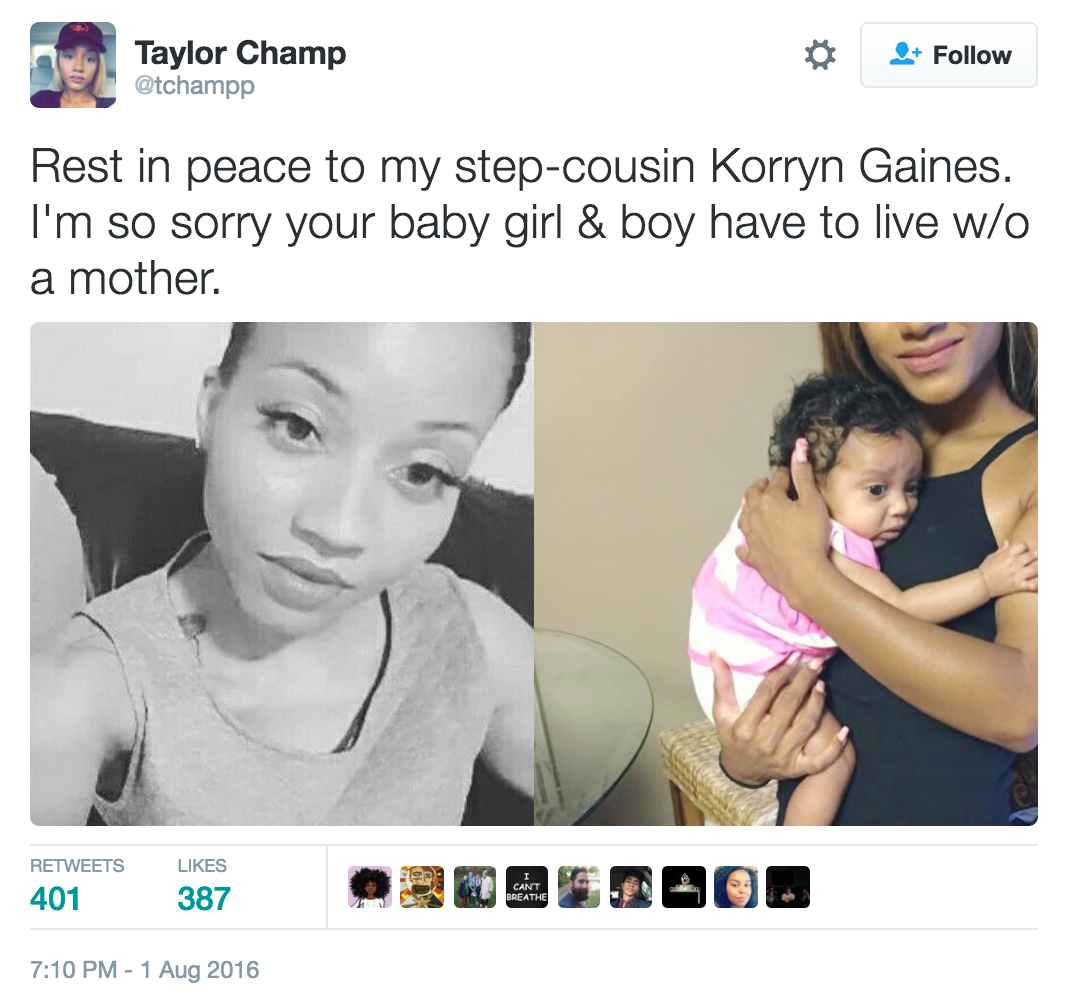 If you've ever wondered about my complaints of "Narrative," in the media, here is a perfect example, from Wesley Lowery at the Post. The HED of the story (and he may not have written it) is "Korryn Gaines is the ninth black woman shot and killed by police this year." The article continues after a description of the incident, "The recent shootings of Alton Sterling and Philando Castile, followed by targeted slayings of police officers in Dallas and Baton Rouge, renewed the national discussion of police use of force and community distrust that has for two years been propelled by the national Movement for Black Lives (often referred to as the Black Lives Matter movement).

After reading that, if you are getting the sense that poor Ms. Gaines was singled out because she was black, you'd be sane. Yet Ms. Gaines held, pointed a shotgun at officers, who sought her and her boyfriend on warrants (him for assault, her for failing to appear in court after a traffic violation in March) and tried to talk with her for some time.

She threatened to kill them.

After HOURS of negotiation, and she pointed the shotgun and threatened to shoot, the officers fired one shot, and she fired at them.

Officers fired back, killing her and injuring her child. Young Wesley laments this injury: "The shooting of Gaines and her son — who police say had non-life-threatening injuries — quickly prompted national outrage among activists who have protested police killings in recent years."

I'm pretty certain from this that Wesley intends us to believe that the police shot poor Ms. Haines because she was black. Not because of the shotgun she pointed at them or the threats to kill them that she made while keeping her child in a hostage situation.

This turned in to a Tweet storm of sorts between Wesley and me, and ended with Wesley changing the headline. The new one reads, Korryn Gaines, cradling child and shotgun, is fatally shot by police.

It is not over. Lowery included in his article an entire paragraph lifted from a ridiculous indictment from last year, unrelated to this. "“Although Black women are routinely killed, raped, and beaten by the police, their experiences are rarely foregrounded in popular understandings of police brutality,” said Kimberlé Crenshaw, director of Columbia Law School’s Center for Intersectionality and Social Policy Studies, in her “Say Her Name” report on black women killed by the police issued last year. “Yet, inclusion of Black women’s experiences in social movements, media narratives, and policy demands around policing and police brutality is critical to effectively combating racialized state violence for Black communities and other communities of color.”"

Routinely raped? Lowery's justification for this propaganda: "Wesley Lowery ‏@WesleyLowery: @MMarxkors @nselby well, we have numbers on sexual assaults by cops...(and it's a quotation from someone identified as an activist)

To which Matt (@MMarxkors) stated, "@WesleyLowery @nselby 1) I don't think you know what routinely means 2) Are you seriously attempting to justify that quote?"

He was. In an email to me, Lowery said in part, "-the quote from Crenshaw is not, technically, factually inaccurate. Why include her remarks? The set up graph was about the Say Her Name protests, which would lead the curious reader to want to hear more about what drives them. This quote captures the ideology behind those protests."